Is Your Multivitamin Supplement a Multi Waste of Your Money


Is Your Multivitamin Supplement a Multi-Waste of Your Money?

When the average person makes the decision to add a nutritional supplement to their diet, a multivitamin is likely to be the first choice. That’s because to most people it feels like “taking out insurance” on their health.

In fact, multivitamin supplements are regularly used by one-third of all American adults and are the most common dietary supplement consumed in the U.S. today. Traditionally, a daily multivitamin is meant to avoid nutritional deficiency. The specific combination of vitamins and minerals is designed to resemble healthy dietary patterns, especially that of regular fruit and vegetable consumption.

The only problem is… many commercially available multivitamin supplements simply don’t work. That’s because they’re made up of isolated, synthetic compounds that are chemically and structurally different from the actual “vitamin complexes” found in real foods.

But before we get into this, let’s be clear as to what exactly vitamins are. By definition, they are organic substances that originate mainly in plants and are essential in small amounts for our health, growth, reproduction, and maintenance.

Vitamins need to be a regular part of our diet since they either cannot be made at all or in sufficient quantities in our bodies to do their job properly. Finally, each vitamin performs a specific function – one vitamin cannot replace another.

This is the problem… most multivitamin supplements today contain chemicals that were never part of our natural diet, do not originate in plants, and are unable to perform vitamin-like activities in our bodies.

All this has led some health experts to suggest that commercially available multivitamin supplements should actually be labeled as “non-food vitamin imitations.”

Do You Really Need a Multivitamin Supplement?

If you’re like the majority of people nowadays, you’re buying your food ready-to-eat instead growing it yourself. This increasing trend has led to the rise of a massive food industry, for which the health of the end-user is considered secondary to profit margins.

Correspondingly, there’s a growing school of thought that the poor nutritive quality of our food lies at the root of all of our health problems today. The nutrition we should get, but don’t, from our diet weakens our immune system and directly impacts our health. This increases our susceptibility to infections and diseases − including cancer.

The Scary Truth About What’s in Most Multivitamins

For decades the “natural” health industry has been talking up vitamin supplements as being essential for a healthy and productive life. However, most commercially available vitamins today are far from being “natural organic substances that originate primarily in plants.”

Instead, the frightening truth is… most vitamins today are derived from petroleum extracts, coal tar derivatives, chemically processed sugar, and industrially processed fish oils. Even worse, acids and industrial chemicals such as formaldehyde are used to make them!

Not surprisingly, synthetic vitamins were originally developed because they were easier to mass produce and cost less.

Also, some brands of synthetic vitamins are labeled “organic” because they contain carbon… which by definition would mean that all hydrocarbon petroleum derivatives should be organic. (That doesn’t entice me to consume some fresh-from-the-ground crude oil). The fact is, most so-called “organic vitamins” commercially available today are not really organic from the true naturopathic, or even the U.S. government’s perspective.

How Do Non-Food Vitamins Differ from “Real” Vitamins in Foods?

First of all, the physiochemical forms of many vitamins present naturally in foods are very different from their synthetically prepared versions which are known as “analogs.”

For instance, vitamin A is present in foods as retinyl esters and mixed carotenoids – while synthetic vitamin A analogs include vitamin A acetate and palmitate, and isolated beta-carotene.

In other words, most commercial non-food vitamins are artificially prepared chemical substances obtained from non-organic sources that are chemically and structurally different from the healthful vitamins present naturally in foods.

This fundamental difference has many major consequences for the “bioavailability” and actions of food-sourced vitamins relative to synthetic vitamins in your body. Bioavailability refers to the proportion of a nutritional supplement that enters your bloodstream and is able to have a biological effect in your body – and the physiochemical form of a nutrient is a major factor in this.

Food-sourced vitamins are more easily absorbed and used by your body relative to their non-food, synthetic analogues, for three main reasons:

In reality, food-sourced vitamins are biological complexes containing multiple components. Functional vitamin activity can only happen when all the co-factors and components of the vitamin complex are present and working together synergistically.

Unfortunately, we have been brainwashed to believe that synthetic chemicals are superior to naturally occurring, food-sourced vitamins and other nutrients. This false idea has been propagated mainly by the food, drug, and pharma industry, whose sole overriding interest is to sell and profit from their inferior nutritional supplements. 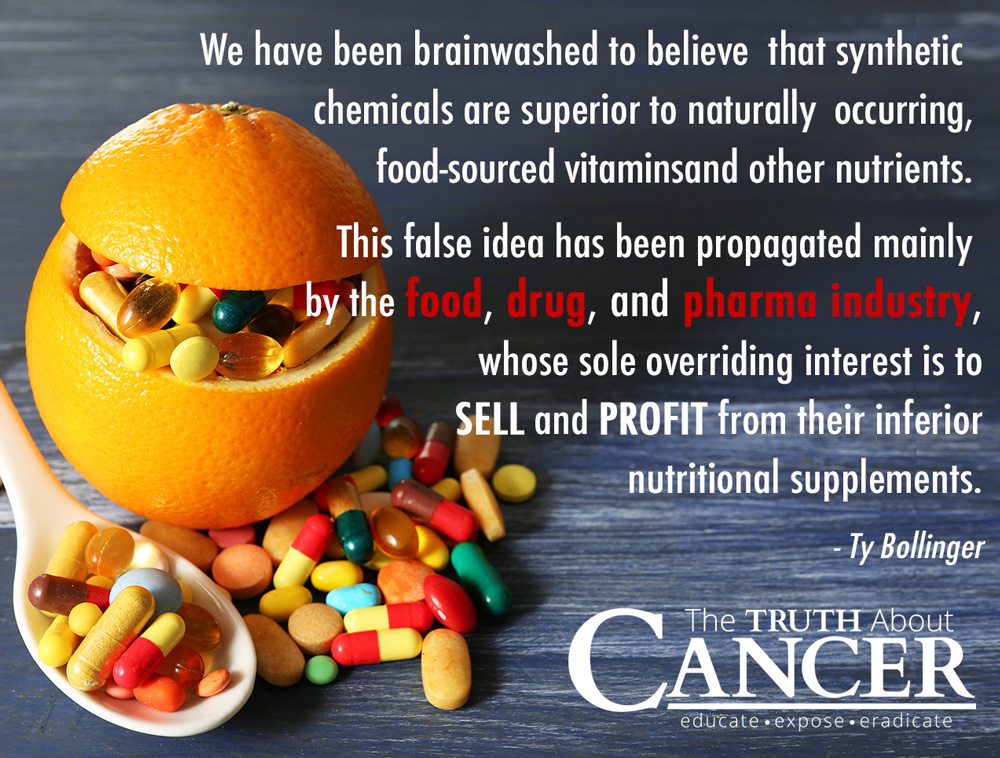 Food-Sourced Vitamin A vs. Synthetic Vitamin A

Vitamin A is the name of a group of fat-soluble compounds that include retinol, retinal, and retinyl esters. This vitamin helps to manage immune function, vision, reproduction, and cellular communication. It also supports cell growth and differentiation; and it plays a critical role in the normal formation and maintenance of the heart, lungs, kidneys, and other organs.

Our diet contains two forms of vitamin A: preformed vitamin A (including retinol and its esterified form, retinyl ester) and provitamin A carotenoids.

Preformed vitamin A is found in foods from animal sources, such as dairy products, fish, and meat (especially liver). By far the most important provitamin A carotenoid is beta-carotene. This is a red-orange colored pigment found in plants and fruits, especially carrots and leafy yellow and green vegetables.

Both preformed vitamin A and provitamin A carotenoids are converted within our bodies to retinal and retinoic acid, the active forms of vitamin A that carry out many important biological functions.

The synthetic analog vitamin A acetate is made from methanol, while vitamin A palmitate is either made from fish oil or synthetically derived. Synthetic beta-carotene is prepared by condensing aldehyde (made from acetone – yes, the nail polish remover) with acetylene.

Food-sourced beta-carotene is known to have high antioxidant ability. Antioxidants help to neutralize harmful free radicals generated in our bodies by inflammation, pollution, UV exposure, and cigarette smoke. It also appears to be safer for our health. One possible reason is because in natural foods it is attached to co-factors such as lipoproteins, which may prevent toxicity.

On the other hand, synthetic beta-carotene has clearly been shown to be harmful for health if given alone to smokers, or to individuals exposed to environmental carcinogens. It also acts against vitamin E’s antioxidant ability to protect against LDL oxidation, which is an early step in the formation of atherosclerosis and development of heart disease.

Vitamin C is crucial for the growth and repair of the body’s tissues, making skin, tendons and blood vessels, helping wounds heal faster, and keeping bones and teeth healthy.

Vitamin C is an “essential” dietary nutrient for us humans because we cannot make it in our bodies. It occurs naturally in two forms, along with bioflavonoids as well as several related compounds with vitamin C-like activity. These forms include salts of ascorbic acid as well as oxidized forms such as dehydroascorbic acid. Hence food-sourced vitamin C should rightfully be called “food complex vitamin C.”

Food-derived vitamin C acts as an antioxidant, protecting against oxidative stress – which happens when there is an imbalance between the production of potentially harmful free radicals, relative to the body’s ability to detoxify them via antioxidants.

Synthetic ascorbic acid, on the other hand, is made by fermenting corn sugar, with acetone (nail polish remover) being used in the final step of its production. This synthetic form does not contain both forms that exist naturally. Neither does it contain bioflavonoids and other co-factors, hence it is very different from food complex vitamin C.

A U.S. government study found that a food containing only 80 mg of vitamin C produced a greater increase in blood antioxidant levels when compared to over 15 times as much isolated ascorbic acid. The presence of bioflavonoids and other co-factors are believed to be responsible for this difference.

Many studies have shown that diets high in fruits and vegetables are associated with lower risk of cardiovascular disease, stroke, and cancer, and with increased longevity. On the other hand, while some beneficial effects of supplemental synthetic vitamin C have been observed in small studies, large well-controlled studies don’t show any change in markers of oxidation or any obvious health benefits.

You’ve probably heard the old expression, “You are what you eat.” I’m not sure who first said it, but this nugget of wisdom has been expanded to… “You’re not what you eat, but what you digest, absorb, and assimilate.”

Our bodies have been conditioned by many thousands of years of evolution to absorb and safely use vitamins in the natural context of their co-factors. In other words, these vitamins are usually present as multi-component complexes, synergistically interconnected with other nutrients and healthful elements present in natural foods.

Many people today consume mega-doses of isolated pharmaceutical-grade vitamins, which are synthesized, standardized, isolated chemicals that are very rarely made from natural sources. As a result, many of these synthetic vitamin analogs are unable to perform vitamin-like biological activities in our bodies – and may even be toxic at higher levels.

Most commercially available multivitamin supplements are nothing more than a jumbled assembly of many ill-fitting parts, an ineffective combination of metals and inorganic chemicals.

In fact, even if you take so-called “natural” vitamins that have been extracted and purified from natural foods, they will not be as effective, since they have been separated from the other components of their functional complex – and because the necessary co-factors which assist in their functioning have been eliminated.

In summary, an ideal multivitamin supplement should contain the entire intact vitamin complex with all the co-factors and essential trace minerals necessary for the given vitamin to function synergistically in our bodies in terms of its bioavailability, efficacy, and safety.

Click here to discover the MultiVitamin that Charlene and I use every day.

Copyright © 2015 . All Rights Reserved.
Made with by Credence